Dovizioso lays down a marker on Day 2 at Jerez

Italian fastest on the second day in southern Spain – followed by Crutchlow and Lorenzo Tags MotoGP, 2017, #2018StartsNow Ducati Team’s Andrea Dovizioso was the quickest man on track on Day 2 of […] 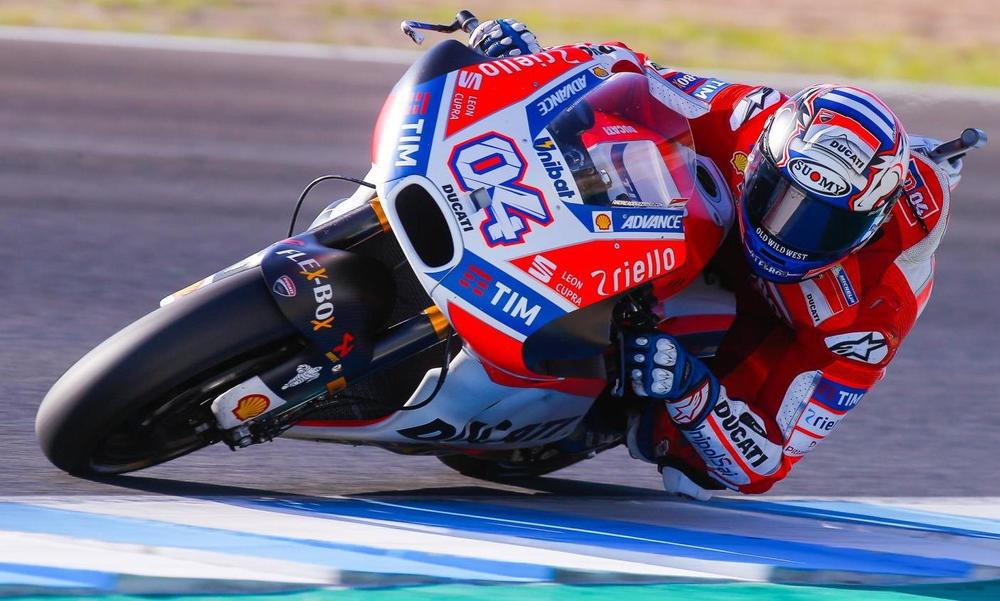 Ducati Team’s Andrea Dovizioso was the quickest man on track on Day 2 of the private Jerez test and his day ended early, much like the Valencia test, after the Italian got through the planned programme. Well under the lap record on new asphalt at the track, it was a time to impress. Remaining focused on trying to improve the turning performance of the Desmosedici, the 2017 Championship runner up was quickest with a 1:37.668 after 37 laps. Teammate Jorge Lorenzo was third fastest at the venue where he took his first podium in red, with the Borgo Panigale factory riders gathering the last of their on-track data ahead of the GP18’s expected debut at the Sepang test in January. Five-time World Champion Lorenzo did 50 laps. 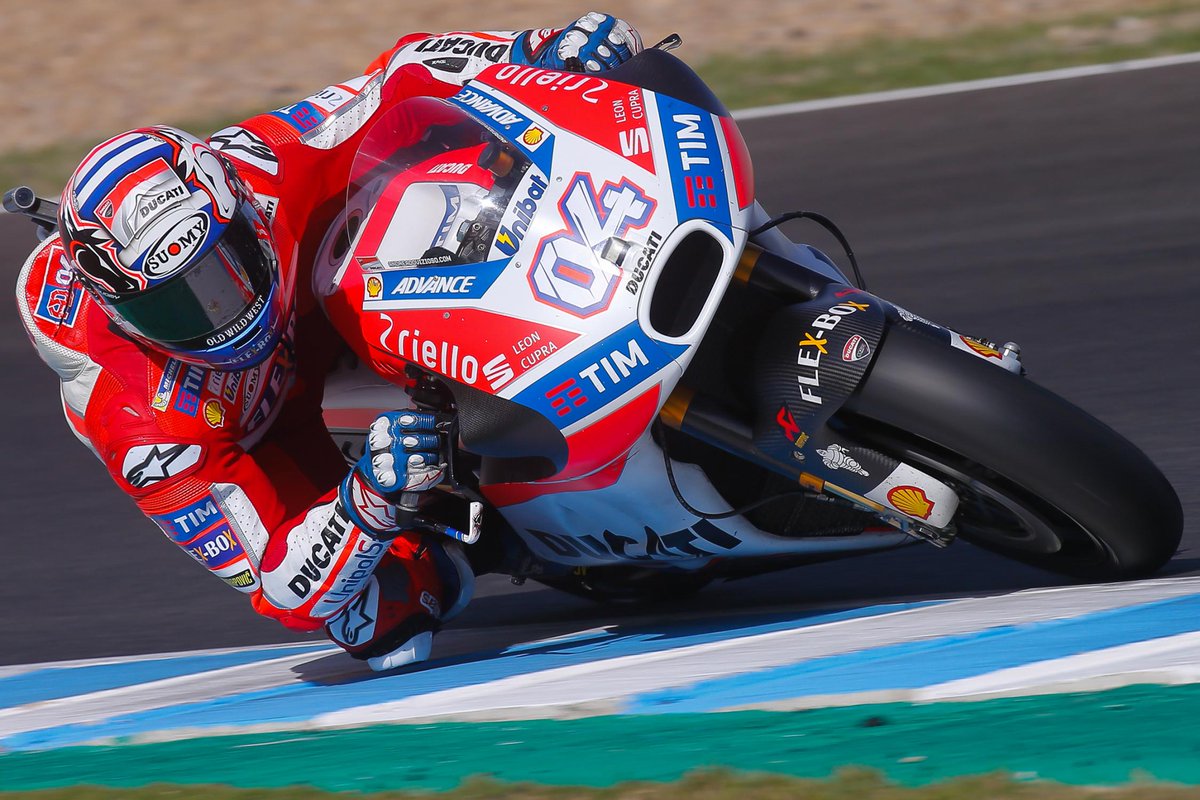 Cal Crutchlow (LCR Honda Castrol) was second quickest, trailing Dovizioso by a tenth and a half as he continues test duties for HRC. With his 2017 bike and two 2018 prototypes, the Brit was prolific and put in 89 laps. In the battle of the rookies, his teammate Takaaki Nakagami (LCR Honda Idemitsu) was just beaten by newly-crowned Moto2™ Champion Franco Morbidelli (EG 0,0 Marc VDS), with the two taking P11 and P12 respectively – very close on times.

After going quickest on Day 1, Team Suzuki Ecstar’s Andrea Iannone was P4 on the second day of action as the Hamamatsu factory focus on engine direction, with this test the final chance for the team to gather data ahead of their final decisions on direction for 2018. Teammate Alex Rins, who sat out Day 1 in favour of test rider Sylvain Guintoli, was back out on Thursday, too – putting in one of the biggest lap counts of the day and taking P6 on the timesheets.

Pol Espargaro was the man who split the two Suzukis, taking Red Bull KTM Factory Racing into the top five once again. Espargaro did 59 laps, with teammate Bradley Smith putting in 47 to complete the top ten. The Austrian factory are trying new chassis, swingarms and electronics settings, as well as focusing on set up and reconfirming data gathered throughout testing so far and their impressive 2017 season.

Miller & Tardozzi on adapting to the Ducati

Tito Rabat, meanwhile, was the fastest of those who have changed machinery. The new Reale Avintia Racing rider was seventh quickest and the top Independent Team Ducati, settling in well. He was just ahead of Danilo Petrucci (Octo Pramac Racing), with the Pramac squad back out on track on Thursday. Petrucci’s teammate Jack Miller was just one position behind the Italian as he adapts to the bike – using one of Petrucci’s GP17s – after also impressing on his Desmosedici debut at the Valencia test. The final Independent Team Ducati on track was the Reale Avintia Racing machine of rookie Xavier Simeon, who was P16 after 66 laps.

Scott Redding and Eugene Laverty were next up on the timesheets, with the two men locking out P13 and P14 for Aprilia Racing Team Gresini on the RS-GP. Redding joins the team for 2018, with Laverty taking on MotoGP™ test duties for the Noale factory following his two days of WorldSBK testing on the Aprilia WorldSBK machine on Monday and Tuesday.

Alex Marquez, standing in for injured Tom Lüthi on the EG 0,0 Marc VDS MotoGP™ Honda, made big inroads on the second day to go P15 after 57 laps under the watchful eye of big brother Marc Marquez (Repsol Honda Team), the reigning MotoGP™ Champion. The Repsol Honda Team are not riding at the Jerez test, instead electing to use the test days next season, with Movistar Yamaha MotoGP and Monster Yamaha Tech 3 also electing to use different dates – heading for Sepang International Circuit for a private test at the end of the month.

For some, there will be more action on Friday – for others, it’s now time for a winter rest after the winter test. In the meantime, check out all the WorldSBK action from southern Spain, too!