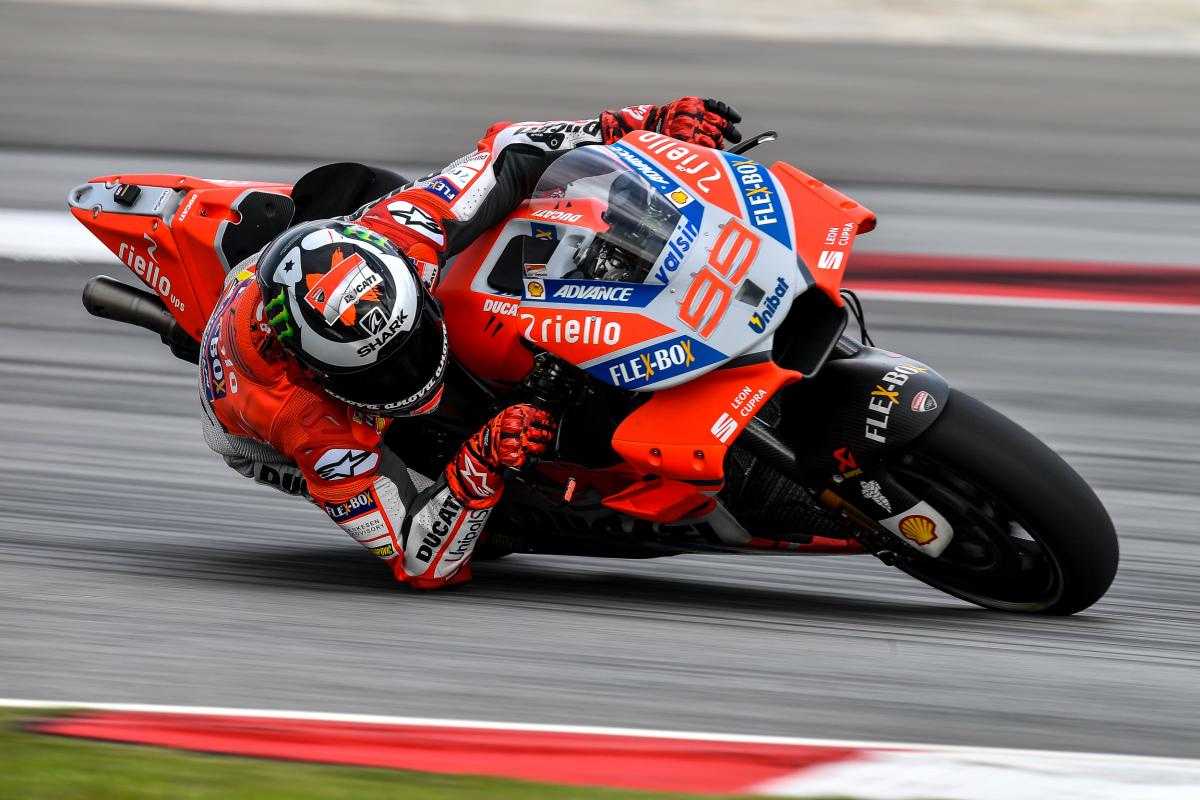 Five-time World Champion puts in the fastest ever lap of Sepang, with Pedrosa and Crutchlow on the chase

Jorge Lorenzo (Ducati Team) decimated the competition on the third and final day of the #SepangTest, setting the fastest ever lap around the Malaysian venue with a 1:58.830. His closest challenger was Repsol Honda Team’s Dani Pedrosa – the fastest man on Day 1 of the test – who was just over a tenth and a half behind his compatriot. The number 26 is also the holder of the pole lap record. Cal Crutchlow (LCR Honda Castrol) took P3, only half a tenth behind the RC213V of Pedrosa ahead of him.

It was a day without the rain that had affected Sunday and Monday’s action, and Lorenzo put in 48 laps overall, topping the timesheets on Lap 21. The Spaniard had also crashed earlier, but then went out and set his best effort. The 1:58.830 lap will not count as the official record due it having been set outside a race weekend, but it is the quickest recorded lap on two wheels. The previous best belonged to Marc Marquez (Repsol Honda Team) and was set during testing in 2015. Lorenzo said there were marked improvements in the GP18 when compared to last year’s machine.

Pedrosa did 58 laps and similarly set his quickest lap early, on Lap 9. Only 0.009 away from breaking into the 1:58 bracket, the ‘Little Samurai’ was the quickest Honda of the test. He was working with one bike in the garage sporting Honda’s new aero fairing and one without, whereas teammate Marc Marquez opted to go aero-fairing free on Day 3, saying the innovation needs bigger setup changes to be evaluated. The reigning Champion ended the third day in seventh and got through a long workload of 75 laps; his best a 1:59.382 after opting to forego a timeattack lap.

Behind Crutchlow in third – the Brit another who did a lot of laps, completing 65 – was the second Ducati Team rider of Andrea Dovizioso. ‘DesmoDovi’, like teammate Lorenzo, took a tumble but escaped unscathed. The Italian ended the day just over a tenth off the top three, and completed 51 laps. Just behind him was another impressive performance for another Borgo Panigale machine; that of Alma Pramac Racing’s Jack Miller. Switching from Honda, the Australian proved his adaptation once again with a 1:59.346 as his best after 36 laps – completing the top five despite proving the first crasher of the day.

Alex Rins (Team Suzuki Ecstar) was the rider who broke the Ducati and Honda stranglehold on the timesheets first, going sixth quickest but only 0.002 off Miller and the top five. Rins, who struggled with injury in 2017, has had a rapid start to his sophomore season and put in another half century of laps at Sepang. Teammate Andrea Iannone, after suffering a number of technical issues in testing so far, was twelfth fastest but managed an increased 62 laps for the Hamamatsu factory as they aim to reset after a more difficult 2017.

The top Yamaha was nine-time World Champion Valentino Rossi, with the ‘Doctor’ slotting into eighth and one of the late improvers. A 1:59.449 on Lap 52 of 54 saw him just pip Monster Yamaha Tech 3’s Johann Zarco in the last few minutes of track action, after the number 46 had been second fastest on Day 2. Teammate Maverick Viñales – fastest on Monday – was P18 on the third and final day, but is within the top six overall with his previous best. Both Yamaha riders had their new aero-packages on track, and Independent Team rider Zarco also tried the fairing on Tuesday. 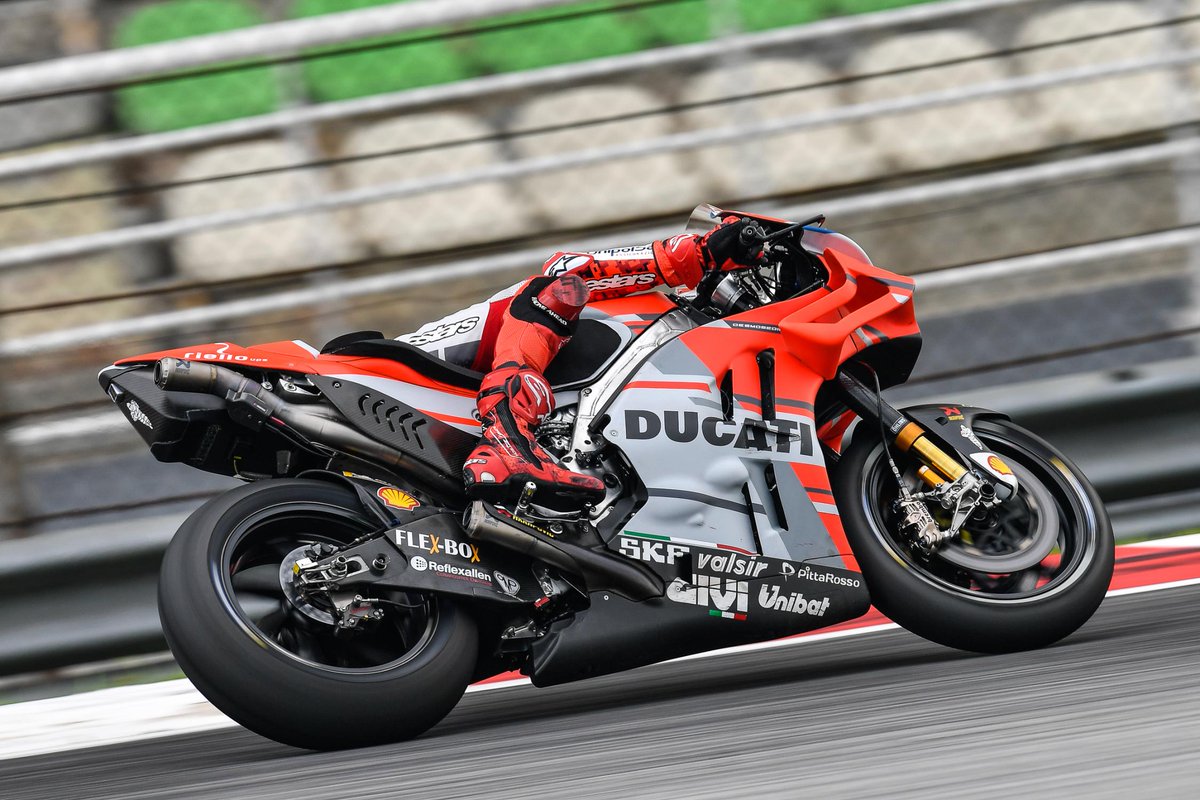 Danilo Petrucci (Alma Pramac Racing) made it both Pramac machines in the top ten on Day 3 as he ended Tuesday 0.017 seconds off Zarco. ‘Petrux’ was also the fourth Independent Team rider within that quickest ten, and just pipped fellow Independent Ducati rider Tito Rabat (Reale Avintia Racing) to the honour. Rabat was a crasher on Day 3, but was unhurt. He did 35 laps and was just 0.019 off Petrucci in an incredibly tight midfield on the timesheets. The next quickest Independent Team Ducati was Angel Nieto Team’s Alvaro Bautista, who was P15.

Aleix Espargaro (Aprilia Racing Team Gresini) led the charge for the Noale factory in P13, and put in his quickest lap on his final exit – the last rider in the 1:59s on Day 3. One of Aprilia’s key focuses has been increasing their horsepower and reconfirming their work over the winter with Espargaro and Scott Redding. Redding continued his adaptation with another 56 laps in the bank.

Following a heavy crash on Day 2 in Malaysia, Pol Espargaro talks us through the incident

Meanwhile, at Red Bull KTM Factory Racing, it was test rider Mika Kallio leading the way on the timesheets for the Austrian factory. They debuted a new aero package, and Kallio did a best of 2:00.464. Bradley Smith did a 2:00.969, with Pol Espargaro sitting Tuesday out following his big crash on Monday. The Spaniard has no fractures but the crash, at Turn 4, was a fast one.

Of the four rookies, it was Takaaki Nakagami (LCR Honda Idemitsu) who was the quickest once again on Day 3. The Japanese rider was fourteenth quickest overall with a 2:00.71, tantalisingly close to the 1:59 bracket. Reigning Moto2™ Champion Franco Morbidelli was around half a second off that and second fastest of the new riders in the field – but the number 21 was 0.021 ahead of Viñales for an impressive scalp. Xavier Simeon (Reale Avintia Racing) was a further three tenths back, with Tom Lüthi (EG 0,0 Marc VDS) the final rookie on the timesheets. It is, however, the Swiss rider’s first test on his new machine, having been sidelined for Valencia due to injury. He crashed at Turn 4 in a slow incident, but picked the bike up and continued.

That’s a wrap on the first action of the year, but MotoGP™ will be back before you know it – getting a first taste of Buriram in Thailand ahead of the 2018 debut of the Thailand GP. The test there begins on the 16th February.