MHI -Roxette are a Swedish pop rock duo, consisting of Marie Fredriksson(vocals and keyboards) and Per Gessle (vocals and guitar). Formed in 1986, the duo became an international act in the late 1980s, when they released […] 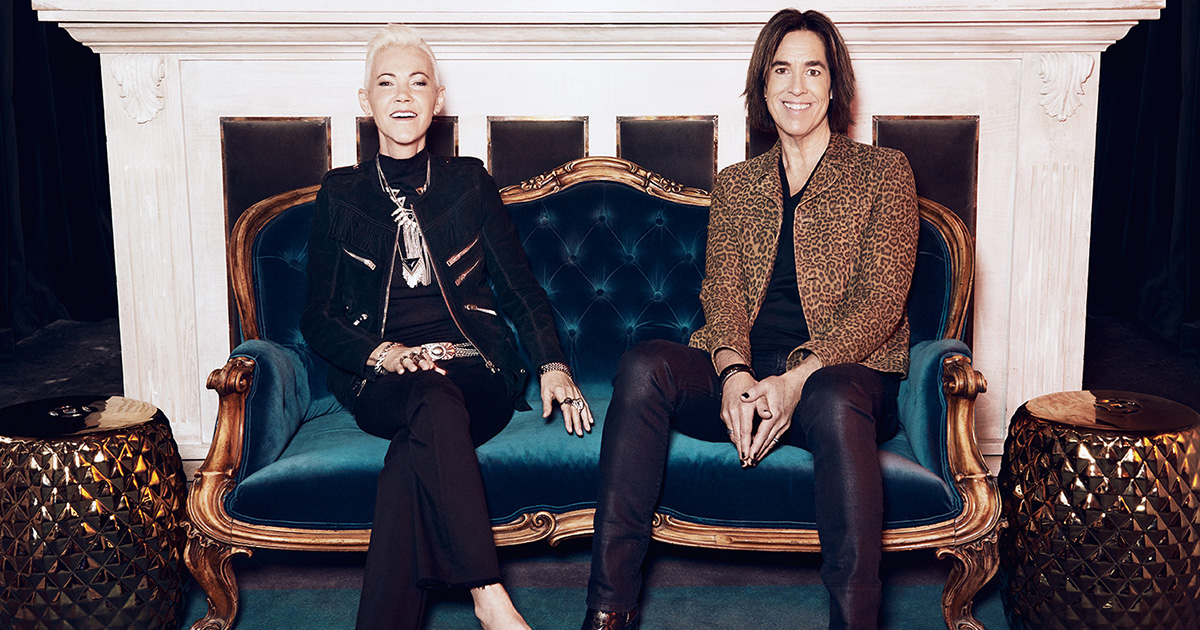 MHI -Roxette are a Swedish pop rock duo, consisting of Marie Fredriksson(vocals and keyboards) and Per Gessle (vocals and guitar). Formed in 1986, the duo became an international act in the late 1980s, when they released their breakthrough album Look Sharp! Their third album Joyride,which was released in 1991, became just as successful as its predecessor. Roxette went on to achieve nineteen UK Top 40 hits and several US Hot 100 hits, including four US number-ones with “The Look”, “Listen to Your Heart”, “It Must Have Been Love”, and “Joyride”. Other hits include “Dangerous”, “Fading Like a Flower”, “Spending My Time”, “How Do You Do!”, and “Sleeping in My Car”.

Before coming together to form the duo, Fredriksson and Gessle were already established artists in Sweden, with Fredriksson releasing a number of solo albums and Gessle being the lead singer and songwriter of Gyllene Tider, which had three No. 1 albums. On the advice of the managing director of their record label, they came together to record “Neverending Love”, which became a hit single in Sweden.

After the release of Don’t Bore Us, Get to the Chorus!, a greatest hits record, the duo took a hiatus before returning with the albums Have a Nice Day (1999) and Room Service (2001). They continued to chart in other territories, mainly in Europe and Latin America, where they earned various Gold and Platinum awards until the beginning of the new millennium. In 2002, the duo took a break from recording and touring when Fredriksson was diagnosed with a brain tumour. Gessle went on to release solo albums and reunited with Gyllene Tider before Roxette took to the stage together again for the first time in 8 years, in 2009, during Gessle’s European Party Crasher tour. In 2011, they released Charm School, their first studio album in ten years, which was followed by Travelling in 2012. Their latest studio album, Good Karma, was released in 2016.

Their songs “It Must Have Been Love” and “Listen to Your Heart” continue to receive wide radio airplay, with both singles recently receiving awards from BMI for achieving five million radio plays. They have sold an estimated 75 million records worldwide, with over 10 million in certified units from Germany, the US and the UK, achieving gold and platinum certifications for Joyride and Look Sharp! in all three regions. 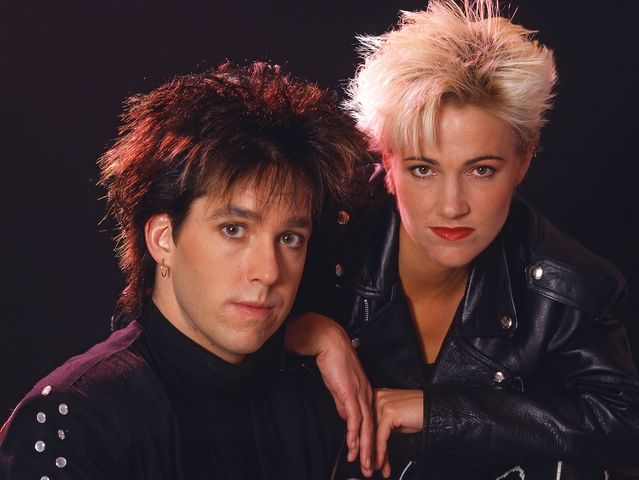 Per Gessle and Marie Fredriksson first met in Halmstad, Sweden, in the late 1970s. Gessle performed in Gyllene Tider, one of Sweden’s most popular bands at the time, and Fredriksson in the less successful Strul and MaMas Barn (Mama’s Children) before both embarked on solo careers. In 1981, Fredriksson sang for the first time with Gyllene Tider on stage and was featured as a background vocalist for a Swedish-language album the band released in 1982. Gessle also worked with ex-ABBA singer Frida, for a song that appeared on her 1982 album Something’s Going On, setting music to a Dorothy Parker poem.

While working on her first solo album, Het vind (Hot Wind), Fredriksson performed more background vocals for Gyllene Tider’s only album in English, The Heartland Café. The 11-track album was released in February 1984 and sold 45,000 copies in Sweden. According to Gessle, the group’s first English-language release was in response to interest expressed by EMI’s American label Capitol Records. Capitol took six of the tracks and released an extended play (EP) record in the US with an abridged title, Heartland, but the company insisted on a different name for the band. Gessle and the other members of Gyllene Tider (Swedish for “Golden Times” or “Golden Age”) chose the title of a 1975 Dr. Feelgood song, “Roxette”.

The newly named Roxette issued one near-invisible release in the US, “Teaser Japanese”, whose video reached MTV’s studio but received no rotation to speak of. It, and subsequent singles, fared better in Sweden, and Gyllene Tider briefly toured the country to support the album. However, “the album died soon enough and the international career died before it even started”, Gessle wrote. “We decided to put Gyllene Tider to rest… until further notice.” Gessle then turned solo work, recording his second Swedish-language solo album, Scener, released in 1985 and again featuring Fredriksson on background vocals. While Fredriksson recorded her second solo album, Den sjunde vågen (The Seventh Wave).

It was then that the Managing Director of EMI, Rolf Nygren, suggested that Gessle and Fredriksson should sing together. Gessle translated a song called “Svarta glas” (“Black glasses”) into English, which became their first single, “Neverending Love”. It was released in the summer of 1986 under the name “Roxette” and reached the Swedish top 10, selling 50,000 copies.

After the success of “Neverending Love” in Sweden, Gessle and Fredriksson quickly recorded a full-length album, translating songs Gessle had written originally for his third solo album. With the release of Pearls of Passion in October 1986, Roxette maintained their commercial momentum in Sweden with their next singles “Goodbye to You” and “Soul Deep.” Some singles from Passion were released in other countries, but these international releases failed to emulate their Swedish success. The album was followed by a compilation of remixes of the same songs, titled Dance Passion.

In native Sweden, “Dressed for Success” and “Listen to Your Heart” were chosen as the first two singles from their second album Look Sharp!, as Gessle and EMI Sweden chose to highlight Fredriksson’s singing. Gessle said, “I always thought we should promote the songs Marie sang. Me being a lead singer wasn’t part of the plan, not for me anyway.” Both singles reached the top 10 of the Swedish singles chart, while the album, which was released in Sweden in October 1988, held the No. 1 position for 14 weeks. Music critic Måns Ivarsson was underwhelmed by the album, writing derisively: “To consist of two such original persons as Marie Fredriksson and Per Gessle, the album sounds unbelievably conventional. Most striking are the lyrics. Gessle’s once so subtle Swedish lyrics have became desolate English nonsense.” But the album won Roxette their first Rockbjörnen awards in Sweden and Gessle his first Grammis award in the category Best Composer.

When the third single from Look Sharp!, “The Look,” became another top 10 single in their home country, Roxette were still unknown internationally. It was while studying in Sweden that an American exchange student from Minneapolis, Dean Cushman, heard “The Look” and brought a copy of Look Sharp! home for the 1988 holiday break. He gave the album to a Minneapolis radio station, KDWB 101.3 FM. The station started playing “The Look” and based on positive caller feedback, the song became very popular, quickly spreading to other radio stations. The song became a radio hit before any Roxette product had been commercially released or promoted in the US market. The story was covered by radio, newspapers and TV in the US and in Sweden, with Gessle recently telling this as the story which highlighted the beginning of their international success. Fredriksson dismissed rumours that Cushman was paid to take the record to the radio station.

EMI had previously rejected Roxette as unsuitable for the American market and they did not have a recording contract there, but after the popularity of “The Look” in the US, EMI officials made the decision to release and market the single worldwide. “The Look” and pressed copies of Look Sharp! were issued in early 1989 to record stores and radio stations. “The Look” became their first No. 1 in the US on 8 April 1989, where it remained for one week. The breakthrough for Roxette became international when the song also topped the charts in 25 other countries, and at the end of the year, Billboard named “The Look” one of the 20 biggest Hot 100 singles of the year.

“Dressed for Success,” featuring Fredriksson on lead vocals with Gessle singing short parts, was the second international single. The single peaked at No. 14 on the Hot 100 as well as at No. 3 in Australia. “Listen to Your Heart” was released thereafter; it differed from previous singles and instead resembled the guitar-heavy ballads of Heart. Spending a single week at No. 1 in the US in November 1989 it bore the distinction of being the first US Billboard Hot 100 No. 1 to be not commercially available on 7-inch vinyl.

A fourth single, “Dangerous,” was released at the end of the year, entering the Hot 100 at the end of December. The single, a duet between Gessle and Fredriksson, spent two weeks at No. 2 on the Hot 100 in February 1990, and again becoming a worldwide success by reaching the top 10 in important music markets such as Germany and Australia. “Dangerous” was released as a double A-sided single in the UK with “Listen to Your Heart.”

“It Must Have Been Love” – Pretty Woman soundtrack

It was around this time that Touchstone Pictures approached EMI and Roxette about contributing a song to the soundtrack of an upcoming film, Pretty Woman, starring Richard Gere and Julia Roberts. Gessle maintained that “It Must Have Been Love,” by then a 2-year-old recording, was chosen because Roxette had no time to compose and record a new song. The film’s producers turned it down, asking for another song, but Gessle declined to produce another song.Some weeks later after re-editing the film before release, the producers re-requested “It Must Have Been Love,” but Roxette had to remove the Christmas lyrics. Gessle and producer Clarence Öfwerman then took the old recording, had Fredriksson replace a single Christmas-referenced line in the song and added some instrumentation and background vocal overlays.

Though it was not the first single released from the soundtrack, “It Must Have Been Love” would prove to be Roxette’s most successful single release. The song spent two weeks at No. 1 on the Hot 100 in June 1990, three months after the film’s release, and stayed for two additional weeks at No. 2, spending a total of seventeen weeks in the top 40. Billboard named the song the No. 2 Hot 100 single of the year, behind Wilson Phillips’s “Hold On.” The single also topped the charts in more than 20 other countries (including Australia) around the world. In Germany the single spent 9 months in the top 75, and peaked at No. 3 in the UK, the duo’s highest singles chart position there.The soundtrack went on to be certified three times platinum by the RIAA.

In 2013, Gessle reunited with his former Swedish boy band Gyllene Tider. They released a new album and toured Sweden. Roxette’s first Blu-ray/DVD concert titled Roxette Live Travelling The World was released. Meanwhile, Fredriksson promoted her new Swedish solo album Nu which led to a successful tour in the spring. In April 2014, succeeding the announcement of the 25th anniversary of Roxette’s first United States #1 hit “The Look” they announced they will be embarking on their RoXXXette 30th Anniversary Tour starting in Russia in late October 2014. The tour ended in February 2016.

On 18 April 2016, an official statement was released, cancelling the last leg of the RoXXXette 30th Anniversary Tour due to concerns about Marie Fredriksson’s health. As her doctors have advised her to refrain from playing live, she will no longer tour with Roxette. Fredriksson stated: “Sadly, now my touring days are over and I want to take this opportunity to thank our wonderful fans that (have) followed us on our long and winding journey.” Gessle added: “The joyride on the road is over now – but we sure had fun, didn’t we?” Roxette has also worked in the studio on their tenth studio album, Good Karma. They have worked with young producers from Sweden like Addeboy vs Cliff “to inject new blood into the Roxette sound”. Remixes aside, this is the first time that they have allowed anyone outside of the Roxette canon to produce new music. On 8 April 2016, the lead single off the album, “It Just Happens”, was released. The album followed on 3 June 2016.

Per Gessle toured Europe in October & November 2018 as “Per Gessle’s Roxette”. The set leant heavily on the band’s back catalogue.