SCORPIONS STORY , MHI – SCORPIONS are a German rock band formed in 1965 in Hanover by Rudolf Schenker. Since the band’s inception, its musical style has ranged from hard […]

SCORPIONS STORY , MHI – SCORPIONS are a German rock band formed in 1965 in Hanover by Rudolf Schenker. Since the band’s inception, its musical style has ranged from hard rock to heavy metal. The lineup from 1978–1992 was the most successful incarnation of the group, and included Klaus Meine (vocals), Rudolf Schenker (rhythm guitar), Matthias Jabs (lead guitar), Francis Buchholz (bass guitar), and Herman Rarebell (drums). The band’s only constant member has been Schenker, although Meine has been the lead singer for all of Scorpions’ studio albums, while Jabs has been a consistent member since 1979, and bassist Paweł Mąciwoda and drummer Mikkey Dee have been in the band since 2003 and 2016 respectively.

During the mid-1970s, with guitarist Uli Jon Roth part of the line-up, the music of the Scorpions was defined as hard rock. After the departure of Roth in 1978, Matthias Jabs joined and, following the guidance of producer Dieter Dierks, the Scorpions changed their sound towards hard rock/heavy metal, mixed with rock power ballads. Throughout the 1980s the group received positive reviews and critical acclaim from music critics, and experienced commercial success with the albums Animal Magnetism (1980), Blackout (1982), Love at First Sting (1984), the live recording World Wide Live (1985), Savage Amusement (1988) and Best of Rockers ‘n’ Ballads (1989), which is their best-selling compilation album.

Scorpions’ eleventh studio album Crazy World (1990) was also well-received, and included the song “Wind of Change”, a symbolic anthem of the political changes in Eastern Europe in the late 1980s and early 1990s and the fall of the Berlin Wall. It is one of the best-selling singles in the world with over fourteen million copies sold.Scorpions have sold over 110 million records in total.They have released 18 studio albums, 27 compilation albums and 74 singles. Six of their singles have reached number one on the charts in different countries. Their albums, singles, compilations and video releases have reached gold, platinum and multi-platinum status 200 times in different countries.

Rolling Stone described the Scorpions as “the heroes of heavy metal”, and MTV called them “Ambassadors of Rock”. The band was ranked number 46 on VH1’s Greatest Artists of Hard Rock programme, with “Rock You Like a Hurricane” at number 18 on VH1’s list of the 100 Greatest Hard Rock Songs. “Still Loving You” ranked 22nd place among the greatest ballads. The Scorpions have received prestigious awards such as three World Music Awards, a star on the Hollywood Rock wall, and a presence in the permanent exhibition of the Rock and Roll Hall of Fame. In 2015 the group celebrated its 50th anniversary.

“Send Me an Angel” is a song by the German rock band Scorpions, recorded for their eleventh studio album, Crazy World (1990). The song was composed by Rudolf Schenker, written by Klaus Meine, and produced by Keith Olsen and the band. It was released as the album’s fourth and final single in September 1991. Along with “Wind of Change”, the song became the album’s signature track, reaching number 44 on Billboard Hot 100 Chart on 25 January 1992, number 8 on the Mainstream Rock Chart on 19 October 1991, and high chart positions in many European countries.
Other versions:
An orchestral version of the song was recorded for the 2000s orchestral album Moment of Glory that features vocals split with Italian singer Zucchero. An acoustic version of the song was also recorded for the 2001’s acoustic album Acoustica.

Following the addition of Jabs, Scorpions left RCA for Mercury Records in the United States and Harvest/EMI Electrola worldwide to record their next album Lovedrive. Just weeks after quitting UFO, Michael Schenker returned to the group for a short period during the recordings for the album. This gave the band three guitarists. Lovedrive was an album that some critics consider to be the pinnacle of their career. Containing such fan favourites as “Loving You Sunday Morning”, “Always Somewhere”, “Holiday” and the instrumental “Coast to Coast”, it firmly cemented the “Scorpions formula” of hard rock songs mixed with melodic ballads. Although it had been widely believed for decades that Schenker’s contribution to the record was only limited to three songs, he vehemently maintained he appeared on the whole album, during an interview with satellite radio host Eddie Trunk. The album’s provocative artwork was named “Best album sleeve of 1979” by Playboy magazine, yet ultimately changed for American release. Lovedrive reached No. 55 on the US charts, demonstrating that the band was gathering an international following. After the completion and release of the album the band decided to retain Michael in the band, forcing Jabs to leave. However, in April 1979, during their tour in France, Michael quit and Jabs was brought in permanently to replace him.

In 1980 the band released Animal Magnetism, again with a provocative cover this time showing a girl kneeling and a Doberman Pinscher sitting in front of a man. Animal Magnetism contained classics such as “The Zoo” and “Make It Real”. Soon after the album’s release, Meine began experiencing throat problems. He required surgery on his vocal cords and doubts were raised[by whom?] about whether he would ever sing again.

Meanwhile, the band began working on their next album, Blackout in 1981. Don Dokken was brought in to provide guide and backing vocals while Meine recovered. Meine eventually healed completely and was able to finish the album. Blackout was released in 1982 and quickly became the band’s best selling album to date, eventually going platinum. Meine’s voice showed no signs of weakness and fan response to the album was good. Blackout spawned two singles: “No One Like You” and “Can’t Live Without You”.

Gaining in popularity from the success of Blackout, the Scorpions performed to over 375,000 fans on Day 2 at the three-day US Festival concert held in San Bernardino, California during Memorial Day Weekend of 1983. The concert was aired live on MTV, giving the band wide exposure in a live show.

MTV gave the album’s videos “Rock You Like a Hurricane”, “Bad Boys Running Wild”, “Big City Nights”, and the power ballad “Still Loving You” significant airtime greatly contributing to the album’s success. The channel even supplied Scorpions with the nickname “The Ambassadors of Rock” to the chagrin of industry insiders who recognized the executive influence behind the scenes. Rolling Stone magazine named them “The Heroes of Heavy Metal”.

The band toured extensively behind Love at First Sting and released their second live album, World Wide Live in 1985. Recorded over a year-long world tour and released at the height of their popularity, the album was another success for the band, peaking at No. 14 in the charts in the US and at No. 18 in the UK.

After their extensive world tours, the band finally returned to the studio to record Savage Amusement. Released in 1988, four years after their previous studio album, Savage Amusement represented a more polished and mature sound similar to the style Def Leppard had found success with. The album sold well but was considered somewhat of a critical disappointment. However, British heavy rock magazine Kerrang! did award the album five K’s out of five.

On the Savage Amusement tour in 1988, the Scorpions became only the second Western group (not American) to play in the Soviet Union. Uriah Heep had performed in December 1987 in Leningrad. The following year the band returned to perform at the Moscow Music Peace Festival. As a result, the Scorpions developed an extended Russian fan base and still return to perform. Also in 1989, Scorpions released the compilation album Best of Rockers ‘n’ Ballads, which, in addition to the band’s hits from 1979 to 1988, included several rare or previously unreleased tracks: “Hey You”, from the Animal Magnetism sessions; the re-recorded “long version” of “Is There Anybody There?”; and a cover of The Who’s “I Can’t Explain”, which was also included on that same year’s Stairway to Heaven/Highway to Hell charity compilation album. This is the Scorpions’ only compilation album to be certified platinum in the United States.

Wishing to distance themselves from the Savage Amusement style, the band separated from their long-time producer and “Sixth Scorpion”, Dieter Dierks, replacing him with Keith Olsen when they returned to the studio in 1990. Crazy World was released that year and displayed a less polished sound. The album was propelled in large part by the massive success of the ballad “Wind of Change”. The song muses on the socio-political changes that were occurring in Eastern Europe and other parts of the world at the end of the Cold War. Crazy World is the band’s last album to receive gold or platinum certification in the United States. On 21 July 1990 they joined many other guests for Roger Waters’ massive performance of The Wall in Berlin. Scorpions performed both versions of “In the Flesh” from The Wall. 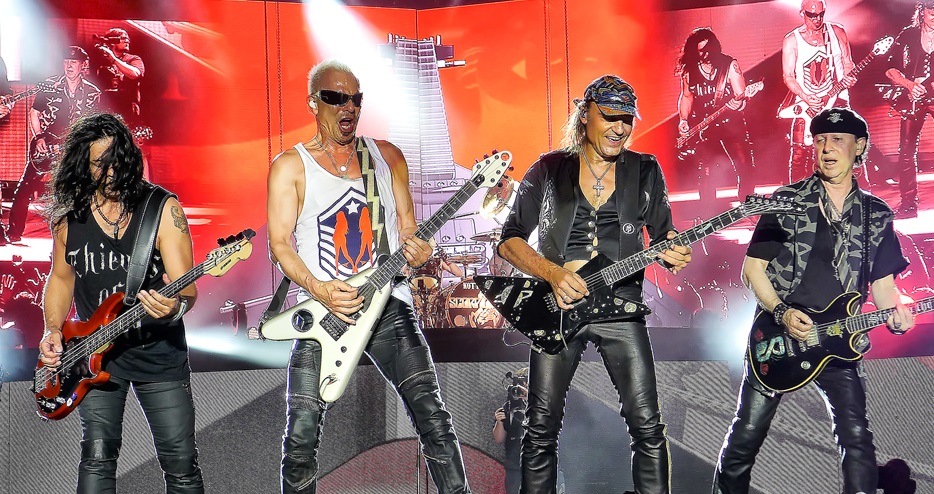 On 23 October 2014 Meine spoke to the band’s French fan-club Crazyscorps, and announced the new record would be published in February or March 2015, to coincide with the band’s 50th anniversary. Contrary to what the band said in 2013, the new album presented not only newly recorded versions of never-published songs, but also new material, written between 2011 and 2014. The album was recorded in Sweden, with producers Martin Hansen and Mikael Nord Andersson. Drummer James Kottak, who left the band in May 2014 for rehab, returned to play drums. The new album Return to Forever was released on 20 February 2015

These deluxe releases include “dozens of unreleased songs, alternate versions of big hits, rough mixes, and rare live concert recordings”. On 28 April 2016, it was announced that Motörhead drummer Mikkey Dee would fill in for James Kottak and play drums on 12 North American headlining dates, including a run of shows at the Hard Rock Hotel in Las Vegas dubbed “Scorpions blacked out in Las Vegas” with Queensryche opening the Vegas shows, and dates in São Paulo. On 12 September 2016, Dee was officially announced as the band’s new permanent drummer.

On 18 January 2017 the Scorpions were inducted into the Hall of Heavy Metal History for leading the two guitar attack in heavy metal. 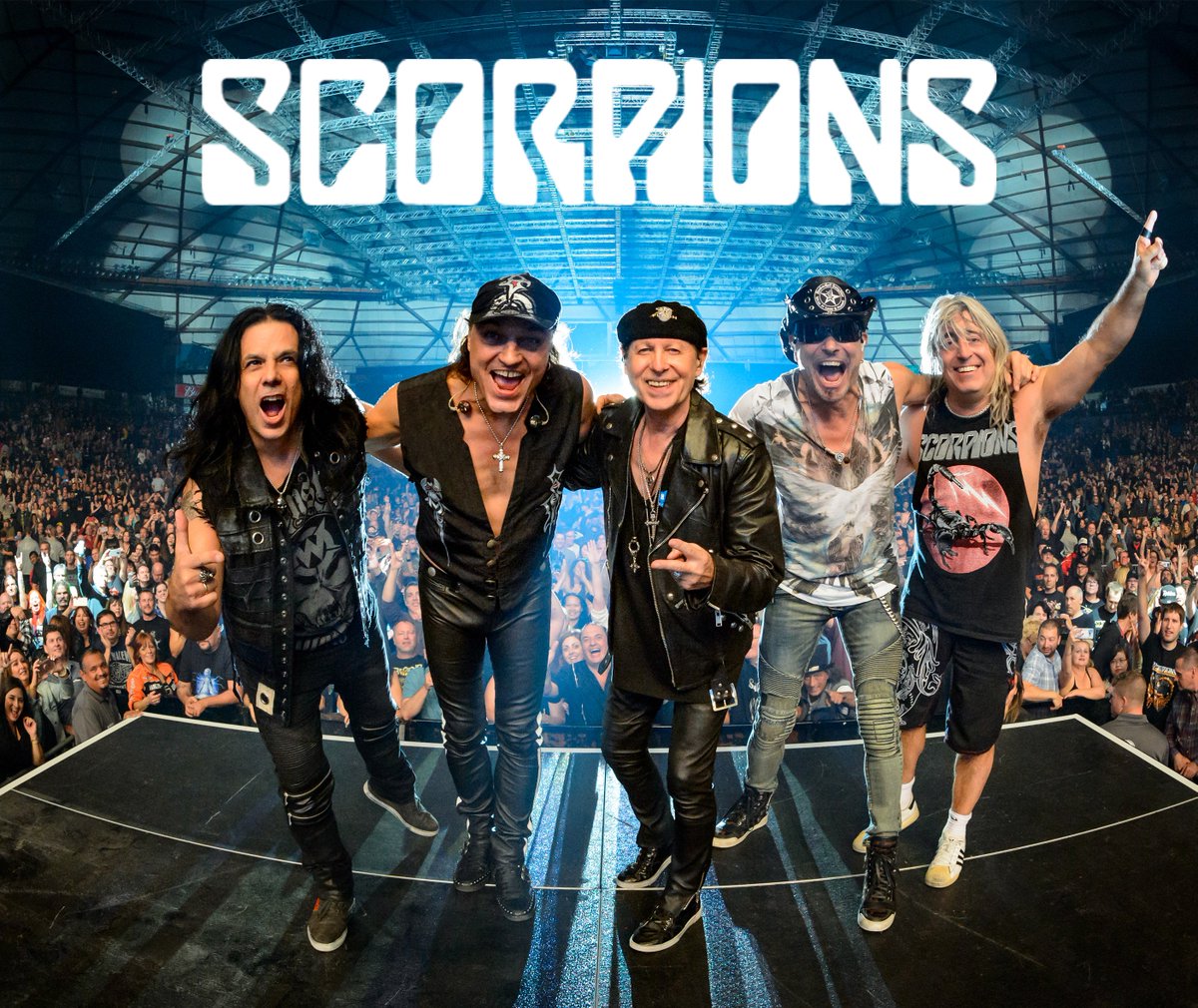 In an August 2018 interview with Digital Journal, Scorpions guitarist Rudolf Schenker stated that the band was open to the idea of recording a follow-up to Return to Forever. He explained: “We are still waiting for a moment for inspiration to do another album, like Judas Priest and Metallica did. You have to wait until the time is right.